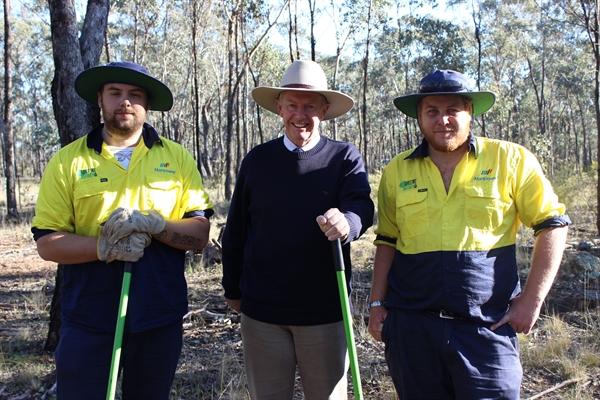 The Red Gum Grassy Box Woodlands outside of Dunedoo are gaining some much needed attention from the Green Army team as part of the Dunedoo & District’s ‘Renew, Restore, Educate & Revegetate’ stage 1 project.
Federal Member for Parkes, Mark Coulton, recently met with the Dunedoo Green Army team and saw firsthand the extensive work being undertaken out at the Woodlands.
“The Dunedoo Green Army team are doing a great job in the Woodlands,” Mr Coulton said.
“Not only are the team removing large amounts of rubbish from the Woodlands, they are also revitalising the walking tracks around the Woodlands so that these tracks will be accessible to local residents and school groups.”
Mr Coulton praised the efforts of the Green Army team at Dunedoo, along with the team’s supervisor Jonothon Lavender.
“Jonothon and the other participants make such a great team here in Dunedoo,” Mr Coulton said.
“I am very pleased that this project is giving the team the opportunity to undertake a range of training, both practical and through courses at the local TAFE.”
Mr Coulton is an avid supporter of Green Army which is first and foremost an environmental programme that aims to support practical, environment and heritage conservation projects across urban, regional and remote Australia.
Mr Coulton believes that the Green Army will make a real difference to the environment and local communities through projects like this one.
The Green Army is a key Government commitment with more than $700 million budgeted over four years.
The Programme will encourage practical action to support local environment and conservation projects across Australia, providing training to thousands of young Australians by 2018.
This investment in the Green Army will bring the Government’s total investment in natural resource management to more than $2 billion over four years.
Further opportunities to join a Green Army project can be found online at www.environment.gov.au/green-army.
Category: Media Releases21 July, 2015