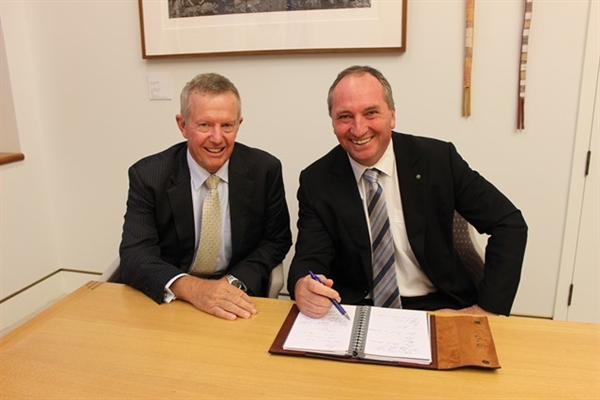 Federal Member for Parkes Mark Coulton welcomes the Coalition Government's investment in economic growth and development in regional Australia by providing an additional $8 million for water infrastructure upgrades across the Great Artesian Basin for two years to 2018-19.
Mr Coulton said the funding would allow important water infrastructure improvements across Parkes Electorate to continue after round four of the Great Artesian Basin Sustainability Initiative (GABSI) ceases on 30 June, 2017.
“As drought continues across many regions in the nation, this new Great Artesian Basin Infrastructure Investment Program will deliver improvements in supported water and land management that directly support our community,” he said.
“The Coalition has now provided more than $115 million to state and territory governments to help protect the future of this vital water resource by capping free flowing bores and replacing inefficient open bore drains with modern piped reticulation systems as part of the GABSI programme.”
The Great Artesian Basin is essentially a huge underground water storage underlying 22 per cent of Australia from Cape York to Dubbo, housing approximately 65 million megalitres of fresh water.
“It's a resource that is vitally important to this region,” Mr Coulton said.
“It underpins at least $12.8 billion in economic activity each year and supports more than 180,000 people in over 120 towns and 7600 businesses in regional and remote Australia-many of which are located in the Parkes Electorate.”
Mr Coulton said uncontrolled bores continued to threaten secure access to water not only for communities, pastoralists and mining industries but also for important ecosystems dependent on groundwater.
“Historically, old-fashioned and inefficient uncontrolled bores and bore drains in the Basin meant massive amounts of water, around 95 per cent, were being wasted through evaporation and seepage,” he said.
“This additional $8 million in funding for water infrastructure upgrades will help to put an end to that waste-great news for the Parkes Electorate.”
To date, the GABSI has seen about 21,000 km of open bore drains decommissioned, and around 30,700 km of new, efficient pipe drains installed.