Gilgunnia cluster fence a fine example of working together: Coulton 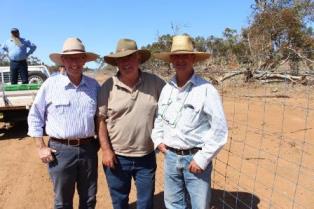 Attending a field day to officially launch the completion of the first large-scale exclusion fence in NSW, the Member for Parkes, Mark Coulton congratulated the 16 landholders involved in the $2.2 million project.
The Nationals-Liberal Government contributed almost $600,000 to the project which involves 22 properties and has seen 210 kilometres of fencing enclose 177,000 hectares.
Mr Coulton said the funding came through the Agriculture White Paper’s Pest Animal and Weeds programme which allocated a total of $3.5 million to NSW to manage pest animals and weeds.
He said the cooperative approach by the 16 landholders within the fence was a great tribute to the young farming families involved and their approach to working together.
“It’s not easy to get so many farmers working together. This fence will provide numerous opportunities for them to come together as a community, to discuss the focus of their resources and time, the maintenance and the control of feral and pest animals within the fence,” he said.
“It’s nice to see the money for the project ultimately finds a place where it does such a practical job,” Mr Coulton said.
He said the project has already achieved some great outcomes with landholders noting a considerable number of pest animals such as pigs are now excluded from their properties.
“Talking with some of the landholders inside the fence at the field day, I’ve heard of some massive losses of lambs due to the predation of wild pigs,” Mr Coulton said.
“This fence will provide a number of opportunities to provide important long-term improvements in the management of pest animals and also controlling grazing pressure within the cluster area.
Mr Coulton said the Federal Government’s investment in wild dog fences has already delivered around 4000 kilometres in Queensland, upgraded 105 kilometres for the Dog Fence in South Australia and helped to establish three cluster fences enclosing 43 properties covering over 197,000 hectares in NSW.
Mr Coulton said a guest speaker at the field day, Morven, Queensland, stud Merino sheep breeder, Will Roberts, painted a vivid picture of the damage wild dogs had caused.
“Wild dogs cause terrible distress for farmers and landholders, they are estimated to cost our agriculture sector up to $89 million each year in direct costs through livestock losses, control measures and disease transmission, and their impacts are felt particularly hard by people who are affected by dry conditions and drought.”
The Morven cluster involves 30 landholders and 320km of fencing. Mr Roberts said 480 dogs within the completed fence were trapped and destroyed.
“Will Roberts said since his property was inside the exclusion fence, he’d taken his marked lamb percentage from the mid-teens to 100 per cent in 2016, doubling his flock within just three years.
“He said analysis by an accountant revealed that for every dollar invested in the cluster fence, it returned a gross margin of $1.49.
“The Australian Government has shown a commitment to helping limit the harmful impact pest animals have on farmers, the environment and our economy.
“Farmers are benefitting from improved stock management and increased profitability through this work, which is providing employment and economic opportunities to regional communities.”
The Agricultural Competitiveness White Paper included $50 million to develop new and improved control tools and techniques and build the capacity of farmers to manage established pest animals and weeds, and a further $25.8 million specifically for managing pest animals and weeds in drought-affected areas.