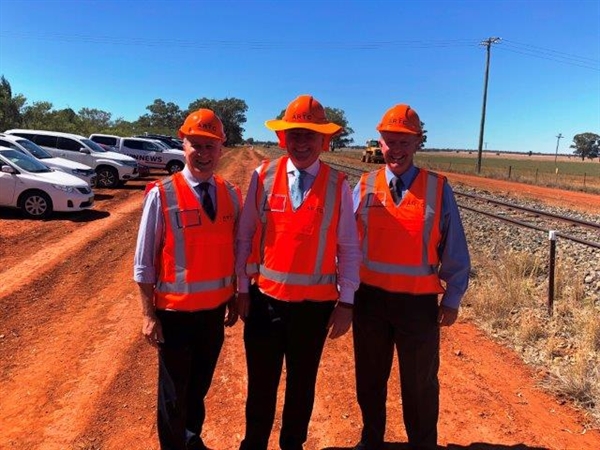 Yet another major milestone for the Melbourne to Brisbane Inland Rail has been reached, with the first delivery of steel rail being delivered for the Parkes to Narromine project.
This is the first steel rail delivered for the entire Inland Rail project since the Australian Government’s $8.4 billion commitment toward the project in the 2017-18 Federal Budget.
Deputy Prime Minister and Minister for Infrastructure and Transport Barnaby Joyce said the Inland Rail was a key plank of the Australian Government’s commitment to create jobs and investment opportunities for regional Australians.
“This project is a game-changer for our regions, creating thousands of jobs nationwide, and returning $16 billion to the national economy during the delivery phase and the first 50 years of operation,” Minister Joyce said.
“It will improve travel times for local farmers and producers, reduce the number of heavy vehicles travelling through small towns, and slash business costs for freight operators.
“The Turnbull-Joyce Government is getting on with delivering this project, and today we have seen the first of 14,000 tonnes of steel to be delivered just for the Parkes to Narromine section. We’re still on track for works to begin in May this year, and it’s great to see this project take shape.”
The rail is 60 kilograms of steel per metre, easily accommodating the Inland Rail standard of double-stack trains of up to 1,800m in length travelling at 115kph with a 21 tonne axle load.
Minister for Finance Mathias Cormann said that Inland Rail would draw more freight from road onto rail, reducing the number of heavy vehicles on Australia’s roads.
“Inland Rail will reduce freight transit times between Melbourne and Brisbane to within 24 hours, lower transport costs and improve supply chain access for our farmers and businesses,” Minister Cormann said.
“This important infrastructure will be the catalyst for flow on benefits and businesses are already gearing up to make the most of the opportunity. What’s more, the reduction of heavy vehicles on the local road network will improve road safety, which remains a key issue for regional Australia.”
Federal Member for Riverina Michael McCormack said the project would drive new opportunities in regional and remote communities including in the Riverina.
“We are already reaping the benefits with Australian produced steel being supplied by Liberty OneSteel Whyalla Steelworks for this project which is great for the economy and securing Australian jobs,” Mr McCormack said.
Federal Member for Parkes Mark Coulton said it was great to see materials being delivered to the site, and said regional Australia would reap significant rewards from the project.
“Inland Rail will stimulate significant development, investment and innovation opportunities in regional Australia, including $480 million for the Central West New South Wales region. This means more jobs and a better freight transport network for the entire region,” Mr Coulton said.
Construction works on the Parkes to Narromine section will commence once all necessary approvals have been received. Works will include reconstruction of the existing track, replacement of bridges and culverts, enhanced level crossings and crossing loops.
More information about the Inland Rail project is available at www.inlandrail.com.au

• The first of 14,000 tonnes of steel rail has been delivered for the Parkes to Narromine section of the Inland Rail project
• Announcement follows the awarding of the contract to Liberty OneSteel Whyalla Steelworks in late 2017, with future contracts to be awarded for the remaining rail
• 262,000 tonnes of steel will be required to deliver the 1,700km project