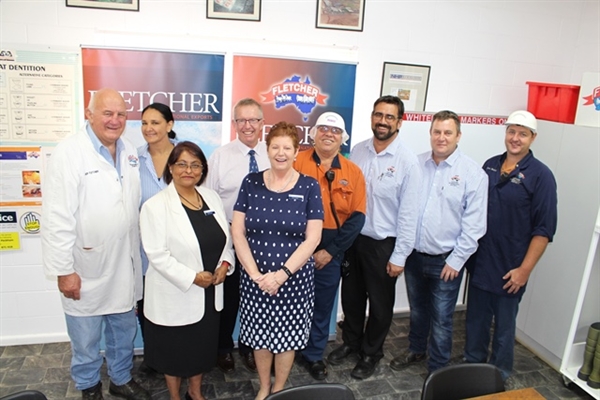 Employment opportunities for Aboriginal people have been bolstered in the Electorate of Parkes through the Coalition Government’s Tailored Assistance Employment Grants [TAEG] programme.
The Member for Parkes, Mark Coulton and the Minister for Indigenous Affairs, Nigel Scullion said the programme aims to provide training for 200 young Indigenous people to work in the sheep meat processing sector.
Mr Coulton said the Federal Government funding to provide employment opportunities for Indigenous job seekers will address the workforce demands in a local business.
“The meat processing industry is expanding and there is a demand for meat processing jobs,” Mr Coulton said.
He said Fletcher International has demonstrated a connection and relationship with the Indigenous community and other key stakeholders including jobactive and accredited training providers.
“Fletchers have identified a service delivery model of recruitment, job placement and mentoring,” Mr Coulton said.
“The project will target job seekers from highly disadvantaged backgrounds who require more support to address multiple employment barriers. Payments will be made on the achievement of outcomes,” he said.
“These targeted grants support community-led initiatives that connect Aboriginal and Torres Strait Islander people to real jobs and is part of the Coalition Government’s commitment to get more Australians into work,” Minister Scullion said.
“These grants will support the Government’s efforts on the Closing the Gap target of halving the gap in employment outcomes between Indigenous and non-Indigenous Australians, and our commitment to jobs and economic growth.”
Mr Coulton said he was delighted to announce that the Coalition Government will ensure local Indigenous Australians received real employment opportunities.
“This grant has been specifically tailored to the needs of Fletcher International to enable it to get more Aboriginal jobseekers into work,” he said.
“I was at the Clontarf Graduation late last year and there were eight young men who were very proud to start a career as a meat processor.
“Of these 200 jobs, if 150 stick then it will be 150 families that will have an income and a role model to look up to,” Mr Coulton said.
Fletcher International’s Chief Executive Officer, Melissa Fletcher said the funding announcement meant so much to her and the business.
“Someone once said to me, ‘you need to use your influence within a great business to make a vehicle for your people’,” Ms Fletcher said.
Roger Fletcher said it was “a big ask” for young Aboriginals from out-lying communities to come into to Dubbo to work.
“We have two young girls from Walgett here. I try and get around the new staff every day when I am here to see how they are going,” Mr Fletcher said.
“My challenge is for those two girls from Walgett to make it. Then you’ve got a chance for another two to come and give it a try.”
The Tailored Assistance Employment Grants are part of the Coalition Government’s Indigenous Advancement Strategy and complement other Government programmes, including jobactive.