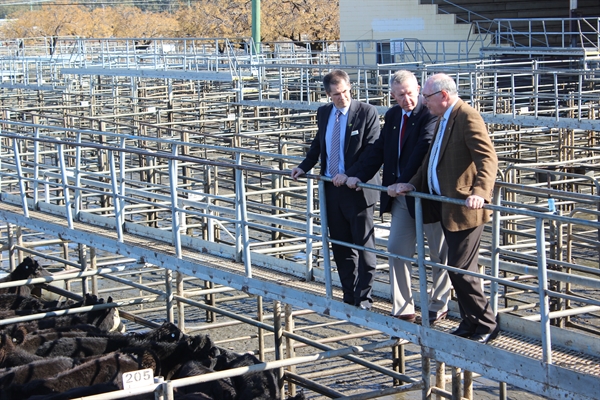 DUBBO’s business activity and the wider New South Wales economy is set for a boost, thanks to almost $3.3 million in Australian Government funding to help upgrade the city’s cattle selling facilities.

Deputy Prime Minister and Minister for Infrastructure and Regional Development Warren Truss and Federal Member for Parkes Mark Coulton viewed plans for the upgrade at the Dubbo Regional Livestock Markets today.
Mr Truss said the project will receive funding under Round One of the National Stronger Regions Fund (NSRF).
“The Australian Government is investing $1 billion over five years through the NSRF to strengthen regions across Australia, enhancing economic growth and sustaining communities into the future,” Mr Truss said.
“The markets are a multi-million dollar facility that have been operating for more than 50 years and grown to be the largest saleyards in the nation in terms of combined sheep and cattle throughput, with more than 1.3 million sheep and 300,000 cattle sold last financial year.
“The throughput value of stock sold is approximately $250 million a year, with the Markets injecting more than $47 million into the Dubbo economy annually  forming a vital contribution to the region.”
Mr Coulton said the project aims to create jobs and contribute to the growth of the region’s cattle industry, underpinning the state’s agricultural sector.
“Through the NSRF, the Government is partnering with Dubbo City Council to deliver this project. More than 30 jobs are expected to be created during construction, with 22 ongoing jobs as a result of the upgrade – this is in addition to the 245 fulltime equivalent jobs the Markets already support,” Mr Coulton said.
Dubbo City Council Mayor Mathew Dickerson said the Cattle Selling facilities upgrade was timely, with improvements to the Sheep Yard expansion now complete.
“Planned works include the construction of a second weighbridge, 140 new selling pens, four double-deck ramps, and the reconfiguration of at least two express lanes,” Cr Dickerson said.
“Thirteen air-operated drafting gates and at least one ratchet rotary force yard will be installed, along with an additional 32 receiving pens with buyer’s and auctioneer’s walkways.”
Construction will start in February 2016 and is expected to be finished by November 2016.
Further information on the National Stronger Regions Fund, which includes the application process, is available at www.infrastructure.gov.au
Media Contacts
For Mr Truss:                     Brett Heffernan                               0467 650 020
For Mr Coulton:                 Amy Welham                                    0448 477 830
For Cr Dickerson:            Andrew Woodcock                          0409 324 379
Category: Media Releases4 September, 2015