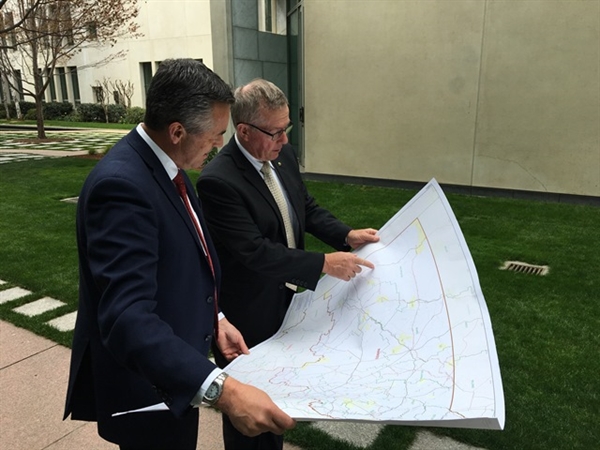 Contracts have been awarded to deliver detailed design work for the Parkes to Narromine and Narrabri to North Star sections of the Melbourne to Brisbane Inland Rail project.
The Member for Parkes, Mark Coulton said the Inland Rail works would stimulate significant development, investment and innovation opportunities for many communities.
He said contracts for both sections has been awarded to WSP Australia Pty Ltd and Mott MacDonald Australia Pty Ltd, with the Parkes to Narromine works valued at approximately $10 million and the Narrabri to North Star works valued around $13 million. The contracts will deliver consulting services to provide engineering, design, environmental assessment and approval activities.
Mr Coulton said reaching this stage on two separate sections of Inland Rail would create a pipeline of opportunity for businesses throughout regional New South Wales.
“This 1,700km line is the largest freight rail infrastructure project in Australia, and the next big thing for regional Australia. It’s terrific to see real progress being made on the Narrabri to North Star section, following our commitment of an additional $8.4 billion to Inland Rail in this year’s Federal Budget, on top of nearly $900 million previously committed,” Mr Coulton said.
Federal Minister for Infrastructure and Transport Darren Chester said this critical infrastructure will be the catalyst for new manufacturing and production opportunities throughout regional Australia.
“We are already seeing private investors making enquiries, and the Australian Government will work closely with local partners and the community to make the most of these opportunities,” Mr Chester said.
The Australian Government, through the Australian Rail Track Corporation (ARTC), is delivering the multi-billion dollar Inland Rail in partnership with the private sector. More information about the Inland Rail project is available at www.inlandrail.com.au
Meanwhile the next stage of the transformational Inland Rail project is underway with the Environmental Impact Statement (EIS) for the Narrabri to North Star section released for public comment by the NSW Government.
Minister Chester said the release of the EIS was a major milestone for the project and encouraged the local community to provide feedback.
“The EIS will give people detailed information about the project, as well the chance to make formal submissions that can be taken into account as we do further design work,” Mr Chester said.
“ARTC will be holding community information sessions and will have experts in attendance to answer any technical questions on the project,” Mr Chester said.
The NSW Minister for Roads, Maritime and Freight Melinda Pavey said the state government was pleased to release the EIS, and said the Inland Rail project had the potential to transform the movement of freight within the state.
The Narrabri to North Star section will make use of 185 kilometres of existing track and require 3 kilometres of new track. Works are expected to include reconstruction of the existing track, replacement of bridges and culverts, enhanced level crossings and crossing loops.