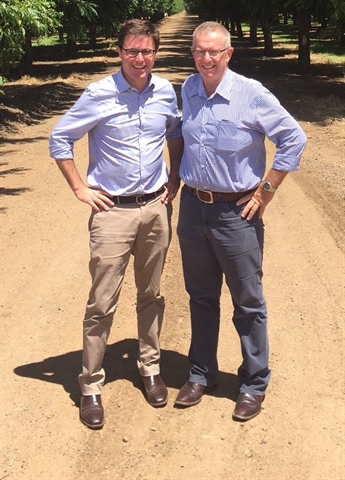 Demand for Aussie grown produce both domestically and in international markets is on the rise.

The Australian Bureau of Agricultural and Resources Economics recently released its Food demand in Australia report to outline key trends.

Australia’s food exports have increased by 6.5 per cent a year since 2009-10 to $39 billion in 2016/17. Domestic food consumption has also doubled over the past 20 years and consumers are choosing Australian produce.

Total national household consumption is $92 billion and imported food only makes up around 15 per cent of that total. This report has a good story to tell – Aussies are supporting our farmers and choosing to buy Australian produce.

I know farmers across my electorate have been struggling with the ongoing challenges of the drought. Recent rainfall across some parts of New South Wales has been very welcome, but relief from the drought won’t happen overnight.

A great way to support our farmers is to buy Australian produce and furthermore, buy that produce in a small town which in turn benefits the whole farming community.

Another key driver to Australia’s increasing food production is the Coalition Government’s commitment to opening up new export markets. Food exports, including crop and livestock based foods, have increased strongly over the past decade.

Australian farmers are benefiting from the Free Trade Agreements with China, Japan and Korea and can look forward to better market access under the Trans-Pacific Partnership agreement (TPP-11). Strong markets – both domestic and international – are essential for our farmers.

The National Disability Insurance Scheme (NDIS) will deliver a better experience to participants thanks to improvements that will be rolled out from October.

• An additional 750 staff will be hired over the next 12 months and targeted training of 6000 planners and frontline staff will take place to support the reform implementation;

• The Government will introduce amendments to the NDIS Act that would allow the NDIS to increase the number of staff who can make access decisions and approve plans.

NDIS participants will progressively have face-to-face planning meetings that deliver easier to understand, accessible plans, supported by a consistent, single point of contact.

Significant improvements are occurring to ensure information is clear and easy to understand to assist people with disability, their families and carers navigate the NDIS.

The reforms are being introduced after a successful trial with 1000 participants. More information is available at www.ndis.gov.au.

Nominate for Order of Australia

The Australian honours system is an important part of our social fabric. Honours help define, encourage and reinforce our national aspirations, ideals and standards by identifying those among us who make an outstanding contribution to our society.

I’d like to encourage people in my electorate to consider one of their peers that they feel would be deserving of an Order of Australia. This may be someone that that has demonstrated achievements at a high level, made an outstanding contribution over and above paid employment, and/or made a voluntary contribution to the community which stands out.

The Order of Australia has four levels and two Divisions (General and Military):

• Companion of the Order (AC)

• Officer of the Order (AO)

If you require guidance in the preparation of the nomination, you can contact the Australian Honours and Awards Secretariat at honours@gg.gov.au  or 02 6283 3533.