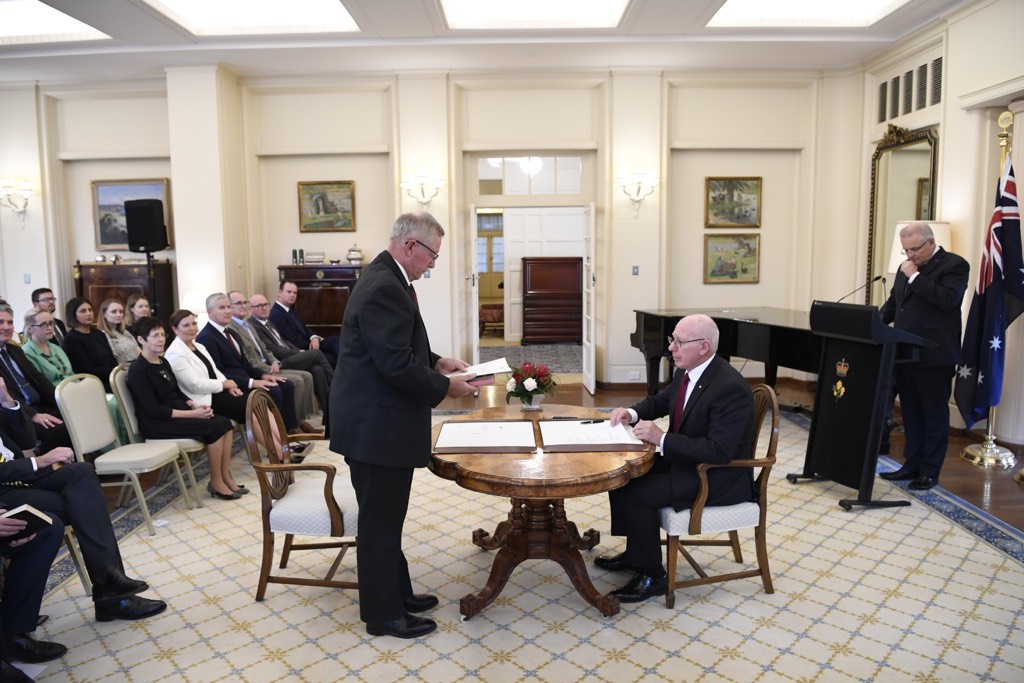 I am deeply honoured to continue as the Minister responsible for Regional Health, Regional Communications and Local Government, having been officially sworn-in on 6 February.

Having carriage of these portfolios since May 2019, I am well aware of the issues at hand and am driven to address the barriers to regional, rural and remote Australians fulfilling their potential.

Alongside these ministerial roles, I am pleased to continue my work advocating in Parliament for constituents of the Parkes electorate, as I have done for the past 12 years.

Photo Caption: Minister for Regional Health, Regional Communications and Local Government the Hon Mark Coulton being sworn-in by His Excellency General the Hon David Hurley AC DSC (Retd), Governor-General of the Commonwealth of Australia at the official ceremony at Government House.

Last week, on the first Parliamentary sitting day of 2020, the Federal Parliament offered its condolences and paid tribute to all those impacted by the bushfires since September.

This was in memory, thanks and honour to those we have lost, and in sympathy to acknowledge the ongoing turmoil for so many families and individuals.

The recovery operations require a whole-of-government response, which is why the National Bushfire Recovery Agency has been established, under the leadership of former Australian Federal Police (AFP) Commissioner, Andrew Colvin. The Government is working to help rebuild affected regions with a vast range of initiatives and support where it is most needed.

While we keep those who have been impacted by the fires at the forefront of our minds, I continue to work on behalf of those experiencing the ongoing drought which is still impacting communities in the Parkes electorate.

We need to remember that the drought won’t end just because it rains – there are communities right around the electorate that continue to do it tough due to the dry conditions. Thankfully, we’ve seen some scattered rain which is a step in the right direction.

We also need to keep the conversation going to promote regional Australia, encourage visitation and reassure our city counterparts that we are still strong and viable, and we are still resilient.

A powerful, new independent body will be created to investigate all suspected veteran and Australian Defence Force (ADF) suicides and causes to help save lives.

The Coalition Government will establish a permanent National Commissioner for Defence and Veteran Suicide Prevention. The National Commissioner will have the enduring power, scope and resources to investigate suicides and related issues as they arise, rather than being restricted by a one-off review looking at past practices.

This is about being forever vigilant for the care and wellbeing of our veterans. The Government is continuing to address the issue of veteran suicide with a comprehensive response to a very complex issue.

This is an important announcement to support suicide prevention, and the mental health and wellbeing of current and former ADF personnel.