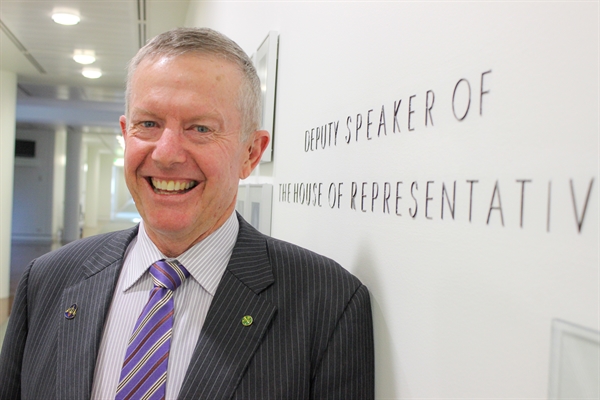 Also on the opening day of the Parliament, I was honoured to be elected Deputy Speaker of the House. I am very privileged to have acquired this position: an official, parliamentary role that focuses on the running of the Parliament.

Member for McEwen, Rob Mitchell was elected Second Deputy Speaker of the House and I congratulate him on this election.

I look forward to working alongside both the Speaker and Second Deputy Speaker to ensure the smooth running of the Parliament for the next 3 years.

In addition to elections for different positions, last week in Canberra also saw the introduction of numerous pieces of legislation into the House.

One key piece of legislation introduced into the House was the Budget Savings (Omnibus) Bill 2016. The purpose of the Omnibus Bill is to give effect to $6 billion in Budget savings necessary to assist in the critical tasks of arresting our debt and restoring the Budget to balance, in order to protect our economy against significant economic shocks.

The Omnibus Bill is an opportunity for the new Parliament to heed this challenge, promoting our nation on the path to a stronger economy, one that can properly fend off global challenges and boost living standards and employment opportunities.

The 24 measures contained in this Bill were announced in our last term and will give effect to savings of $6 billion over the Budget and forward estimates, savings that were written by Labor into their election costings.

This year’s theme is ‘Stronger Communities, Safer Children’ focusing on the fact that communities matter and have a huge part to play in protecting and supporting children.

Events are taking place around the country so that community members can get together to focus on promoting the safety and wellbeing of children and young people in their neighbourhoods.

Approximately 40,000 Australian children are abused or neglected each year, which demonstrates the need to do more. I am committed to working together with our community to ensure children and young people are valued, nurtured and live free from abuse and neglect.

We need to build communities where there is a sense of belonging, where people know each other and where families are supported. Evidence shows there are tangible long term benefits when you volunteer, when you connect with other families, when you run a community organisation or program.

I would like to acknowledge and thank all the volunteers and local services in our community for doing their bit to support families and children and who also make rural and regional NSW a great place to live.

National Child Protection Week is an opportunity for all Australians—as community members, extended family members, neighbours, employers, employees, parents, carers or through other roles—to focus on how we can play a part in promoting the safety and wellbeing of children and young people.

More information about National Child Protection Week, community events in near you and more ways to get involved please visit napcan.org.au.