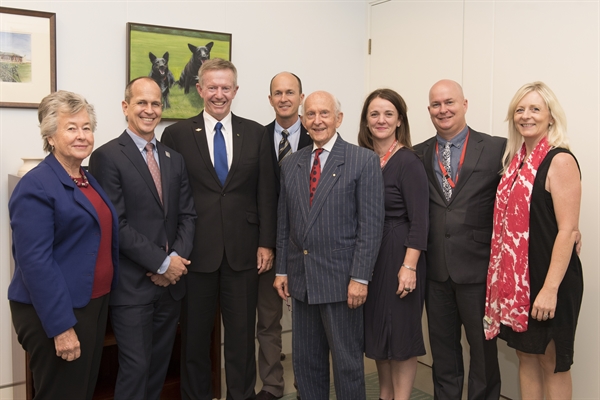 Receiving this petition is certainly one of those special moments in my parliamentary career to date. I could not have predicted the magnitude of the number of signatures collected through this petition. It really does show two things. It shows that people do see the need for this centre in Western NSW. It also shows what an amazing group of people we have living in the communities of NSW including Dubbo and Western towns. I am told that people from many other places have also thrown their support behind this cancer centre which is fantastic news.

I would like to congratulate and thank the many people who coordinated this petition including Lyn Smith and the Rotary Club of Dubbo West, local medical professionals Dr Florian Honeyball, Dr Colin McClintock and Professor Joseph Canalese, the Jimmy Little Foundation and the Aboriginal Cancer Support Group as well as everyone else that has been involved. It really has been a remarkable effort by everyone.

Thankfully during the process of these signatures being collected, we did have an announcement that the Federal Government will contribute $25 million towards the centre and it has been confirmed by the NSW Government that they will provide the matching funds to complete the centre.

I also met with Deputy Premier of NSW Troy Grant and ‎Chief Executive at Western NSW Local Health District Scott McLachlan last week to start the formal process of the funding agreement so that Western Health can start planning the details for this centre in stages 3 and 4 of the hospital’s redevelopment. Details of the funding agreement are expected to be negotiated over the coming weeks.

In Freeing Peter the Greste Family have come together to tell candidly, for the first time, from all five points of view, exactly what it was like to have a loved one incarcerated in a foreign country for 400 excruciating days.

Copies of this book are available at http://www.booktopia.com.au/freeing-peter-andrew-greste/prod9780670079315.html;jsessionid=35twxbAO3zTMfhDsE6kk3OXB.undefined?a

Roads to Recovery funding
Quarterly funding under the Australian Government’s Roads to Recovery Programme has now been distributed to councils in the Parkes electorate to assist with local road construction and maintenance.

Minister for Infrastructure and Transport Darren Chester said the 2016 Budget extended the Roads to Recovery Programme and provided an additional $50 million per annum from 2019-20 onwards, bringing the annual commitment to $400 million.

Minister Chester described this as the Australian Government making good on election promises by continuing to support programmes that deliver funding exactly where it’s needed based on local knowledge.

The Minister confirmed that the Australian Government will distribute $3.2 billion to councils nationwide between 2014–15 and 2018–19 under the Roads to Recovery Programme to support maintenance of the nation’s local road network and improve road safety.

Councils in the Parkes electorate have received more than $3.3 million in Roads to Recovery payments this month.

Councils across the country have so far used Roads to Recovery funding to repair and upgrade more than 53,500 road sites.

Through the Roads to Recovery Programme, the Australian Government supports councils with the ongoing maintenance of Australia’s local road infrastructure, facilitating greater access and improved safety, economic and social outcomes.

More information on the programme is available online at www.infrastructure.gov.au