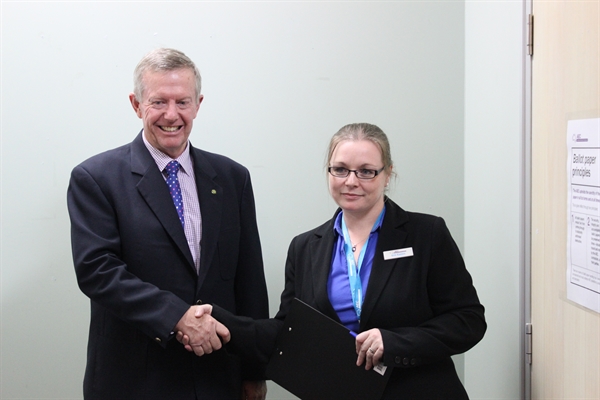 AEC Declaration
The Australian Electoral Commission (AEC) has formally declared the result for the division of Parkes for the 45th Parliament, confirming my re-election as the Federal Member for Parkes.

I am absolutely honoured to have been re-elected by the people of the Parkes electorate for a fourth term and I am very much looking forward to representing the electorate in the new Government.

I certainly appreciate all the support that has been given to me from right across the electorate. I consider it a great honour to represent our region in the Nation’s Parliament.

The most important thing to do now is to get on with the job.

I would like to thank the AEC for their diligent and conscientious work throughout the whole election.

Deputy Prime Minister and Leader of the Nationals, Barnaby Joyce will continue as Minister for Agriculture and Water Resources which is excellent news for local producers and exporters.

My good friend and Member for Riverina, Michael McCormack has been promoted with a new role for the Nationals as Minister for Small Business.

Member for Cowper, Luke Hartsuyker has taken on the position of Assistant Minister to the Deputy Prime Minister.

Member for Lyne, David Gillespie will take his first position within the Ministry as Assistant Minister for Rural Health.

In addition, Senator Nigel Scullion will remain as Minister for Indigenous Affairs and Darren Chester will continue as Minister for Infrastructure and Transport. Queensland National Keith Pitt has a new portfolio as Assistant Minister for Trade, Tourism and Investment while Senator Matthew Canavan has been promoted into Cabinet with the role of Minister for Resources and Northern Australia.

I congratulate all of my colleagues on securing their relevant positions within the Turnbull Ministry. This is not only fantastic news for the National Party but most importantly it is great news for residents of rural and regional Australia to have a greater, stronger voice in Canberra.
.…………………………………………………

The Local Sporting Champions program is an Australian Government initiative designed to provide financial assistance for young people aged 12-18 towards the cost of travel, accommodation, uniforms and equipment when competing, coaching or officiating at an official national sporting organisation (NSO) endorsed state, national or international sporting championships or a School Sport Australia state or national championships.

The Australian Government recognises that junior sportsmen and women can find it difficult to meet ongoing costs associated with participating in state or national and international sporting championships. This program will help provide individuals with the assistance needed to compete at these championships.

Further information about the Local Sporting Champions program can be found at http://www.ausport.gov.au/participating/local_sporting_champions

To find out how to be a Souperhero visit https://souperhero.org.au/