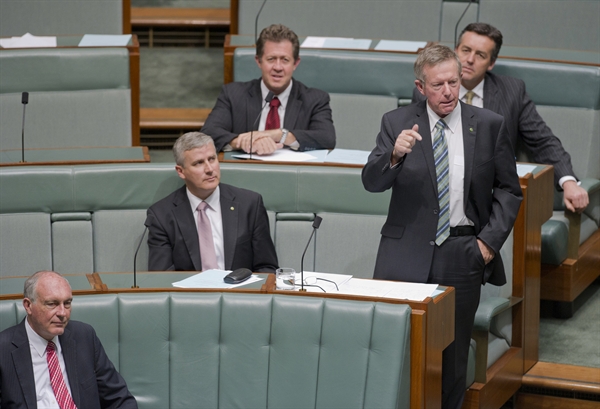 Mr COULTON (Parkes–The Nationals Chief Whip) (11:51): I acknowledge the previous speaker and thank her for the leniency she showed to me in the chamber last week-but that is as far as it goes! I am sorry the member for Parramatta has left. I could give her a quick history lesson. The member for Gippsland was elected in June 2008. He actually campaigned against an emissions trading scheme, as it was then, along with the rest of the Nationals. It was the first time that the Rudd juggernaut came to a head and there was a huge swing away from the government. Indeed, the member for Gippsland’s by-election was the first public indication that people were opposed to putting a price on carbon. The campaign, with the La Trobe power workers getting behind the member for Gippsland and the Nationals, is now a matter for the public record. The member for Parramatta also said that, in the week prior to the election, the Prime Minister indicated she was going to put a price on carbon, but the memory I have of that week is that she actually said, ‘There will be no carbon tax under a government I lead.’ I thought that was fairly clear, but, once again, that is history.

The issues at stake here, as stated in the member’s motion, include the fact that, under the government’s scheme, the biggest polluters will pay. Also, research shows ‘the carbon price will have a disproportionate impact on small businesses, regional industries and regional communities’. That is indeed correct. If you go back to Professor Garnaut’s regional white paper, he said that regional communities would have an economic downturn of 20 per cent while urban areas would have a downturn of eight per cent. Right from the start, as a member who represents one-third of the area of New South Wales, the largest rural electorate in New South Wales, how could I ever support a scheme that was going to disproportionately disadvantage my electorate compared to electorates elsewhere? The idea that the biggest polluters will pay is an absolute nonsense. We are starting to see that now.

It was interesting that, in the House last week, members of the government were talking about the not so great rise in the cost of living index and expenses. It has come to the fore now that small businesses are that squeezed-they are in such a precarious position-that they are not game to raise their prices. They are actually absorbing the cost of the carbon tax because to increase their prices in the fragile state that many of these businesses are in now would mean losing even more customers. That is actually giving a distorted view of why electricity bills have not risen thus far.

If you go through to local government-and the federal government has identified some of the bigger councils and issues mainly to do with emissions from landfill-you will see there are a whole range of things that local government deal with. There is street lighting, keeping their swimming pools clean and the energy required for that, the cooling for aged-care facilities and, in my electorate, many of the aged-care facilities and preschools are owned by local government, which are the local communities. I was speaking to a general manager in my electorate this morning and, because of rate pegging in New South Wales, the increase to their costs brought about by the carbon tax cannot even be met by the allowable amount that they can increase their rates. So ratepayers in regional Australia are going to suffer a decline in services. That is before 2014 when we start to see the increased freight charges coming through and what that will do not only to the cost of construction but also to road building with bitumen, which is petroleum based. The increase in the cost of asphalt bitumen will also come through.

Another thing that is having an effect in my community is the cost of refrigerant gas. It has gone up by 300 per cent. A refrigeration mechanic from Dubbo came to see me. He is a small operator, employing six people, and he was commenting on the cost of refrigerant not only for people who need that for household appliances but particularly for large-scale businesses. For instance, if the local bowling club has a mishap and loses the refrigerant in their coolrooms, it will be up for thousands of dollars in costs to repay that.

I heard the member for New England, in an astounding outburst last week, saying that farmers were going to be exempt, that the carbon tax was not a pricing mechanism and that the Carbon Farming Initiative was going to be a wonderful thing for Australia. He did not mention where the extra funds were going to come from for running irrigation pumps; for the electricity needed to shear every sheep; for the water that is pumped around a property to water the livestock; for the urea, a fossil based fuel. There is a huge cost of inputs. All the farm chemicals such as 2,4-D and Roundup are all based on petroleum, so all these costs are coming through.

We have a Carbon Farming Initiative that has no guidelines and no methodology. Indeed, to implement a methodology that would allow a credit for soil carbon that was of a high enough value to be tradeable, the cost of that process would negate any benefit to farmers. Farmers have worked out that the CFI, the Carbon Farming Initiative, will be of no benefit to them and have stayed away from it in droves.

Volunteer groups in my electorate are also under the pump from the carbon tax. I had a meeting with some of the men’s sheds in my electorate a couple of weeks ago, and we are looking at maybe pooling men’s sheds across New South Wales, or even Australia, together and maybe trying to get some sort of a discount on their power, because men’s sheds run electric equipment, lighting, heating and things like that and they are having an issue with it.

The government has stopped talking about trying to protect the environment with this some time ago and we are now talking about putting a price on carbon. But we are not seeing a quantifiable measure.

In my electorate, with this great Green initiative that we have going through, we are seeing the emergence of wind farms-and that might be a speech for another day. A great irony of this is that there are quite a few hundred tonnes of concrete that secure the base of a wind tower. On one side of Mudgee there are coal mines that are shipping at a rapid rate to China coal that gets turned into wind farms that get shipped back to Australia whereby we can generate a dearer but cleaner form of electricity. But the great irony of it is that the cement that secures the wind farms at Mudgee now comes into Sydney heads on a ship from Asia as clinker and the last refinement is done at Clyde and is put on a truck and sent over the mountain to Mudgee, past the closed Kandos cement plant.

Despite the member for Hunter saying-because Kandos is now in his electorate and it was in mine-that the carbon tax did not close that cement plant, Cement Australia have been telling me for four years, ‘When the carbon tax comes in, cement plants will close.’ When the carbon tax came in Kandos cement closed, and now our wind farms are being based on cement coming from China. Where is the sense in that? (Time expired)