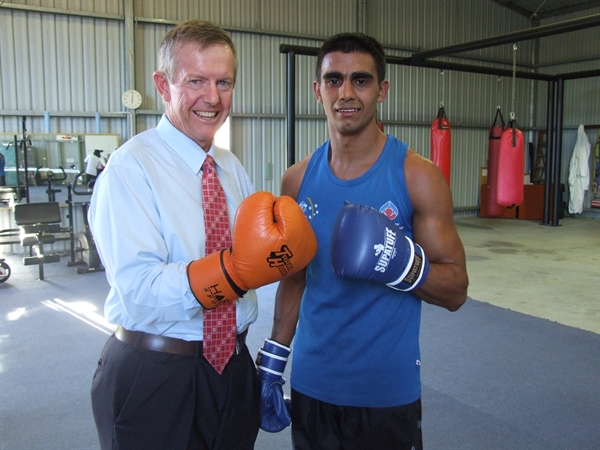 Briefly, I would like to add my comments on the 2012 Olympic Games to the record. First of all, I would like to congratulate the City of London on the fantastic job that they did of hosting the event. Second, I want to speak about the efforts of our Olympians generally. A lot was said about their results, and I found myself wondering how a result that is a fraction of a second slower than the gold medal performance can be seen as a failure. When you get that close to being the best in the world, everyone should be very proud. In general terms, I think the Olympics are great for not only Australian pride but also highlighting the importance of sport and an active lifestyle. So I compliment the team on that.

But what I really want to speak about today is someone from the Parkes electorate, a young man that I know personally-a young Aboriginal man from Moree by the name of Cameron Hammond. Cameron Hammond is one of the most respectful, polite and inspiring young men that I have had the opportunity to meet. He is a boxer in the welterweight division and competed in that division in London. Cameron started his boxing career in Moree. I would also like to pay tribute to his coach, Danny Cheetham, who has mentored and trained Cameron-and Cameron actually lived in Danny’s home for a lot of that time. He has been a real inspiration to Cameron, I know. Cameron has spent quite a bit of time at the Australian Institute of Sport as well.

As a son of Moree Cameron has made the entire community incredibly proud. Indeed, yesterday, students from Moree East Public School were in Parliament House, and they were telling me how proud they were that one of their number was an Olympian. Through Cameron’s efforts, these young people can see that it does not matter where you grow up or in what circumstances; if you apply yourself, if you set goals for yourself and if you work hard, you can mix it with the best in the world.

Cameron won his first fight, defeating Nigerian boxer Moustapha Abdoulaye Hima 13-6 in his preliminary round on day 2 of the London Olympics. In the next round, he faced up to Canadian Custio Clayton but was unfortunately defeated 14-11 in that bout. But I think what really sums up Cameron are some of the messages he posted on his Facebook page-he is one of my Facebook friends-after that loss, and I will read out a couple. He wrote:

Well I lost my fight 🙁 Sorry everyone! He was a good fighter, very strong. No excuses about the loss. But I made the top 16 in the world and now I’m an Olympian for life. It definitely has been the best experience of my life. So proud to represent my country and my culture at the Olympics. Thank you so much to everyone that has been supporting me yous have been great. Can’t wait to see you all when I get back to Australia. Now just go and enjoy London and do some sight seeing.

And a couple of days later:

Well, that’s it. The Olympics are finished! It’s a little emotional 🙁

I enjoyed myself here, had so much fun. Proud to be here representing my country and culture. Gotta say the opening and closing ceremony were amazing! I didn’t get a medal like I wanted to but I tried my best. London Olympics 2012 was the best experience of my life so thank you to everyone that helped and supported me. Leaving tonight and will be back in Australia Wednesday!

I think that sums up the Olympic spirit. Cameron Hammond, who grew up on the streets of Moree and is a fine young man, has had the experience of his life. I think, with Cameron’s case, that the Olympics is the start of Cameron’s career and not the finish.