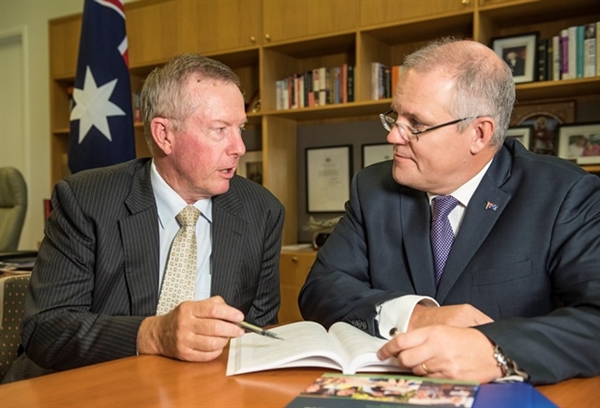 Federal Member for Parkes Mark Coulton said a Federal Budget of Opportunity, Security and Fairness will continue to unlock the potential of regional and rural communities within the Electorate of Parkes.
“Residents and business owners in the Parkes Electorate will have new employment and investment opportunities and this funding will ensure our children and grandchildren will benefit in years to come,” he said.
Mr Coulton said the announcement of $8.4 billion for the Inland Rail project would be a major stimulus for the Electorate with about 307 kilometres of new rail line to be constructed for the leg between Narromine to Narrabri. He said rail line renovation and construction north of Narrabri and up to the Queensland border would also attract significant investment.
He said the $8.4 billion for Inland Rail to build a dedicated “fast-track” for freight trains to get products from farms and factories to shipping ports in Melbourne and Brisbane by 2024. It will create 16,000 new jobs at the peak of construction with an average of 700 additional jobs per year over the entire period.
“The Inland Rail project has a positive cost-benefit analysis, has been positively assessed by Infrastructure Australia, the nation’s independent infrastructure umpire, as returning $2.60 for every $1.00 invested, and features on IA’s Priority List.
“This is going to take trucks off the Newell Highway and help us get our produce to our markets faster and cheaper,” he said.
Mr Coulton said extending the instant asset write-off programme and incentive payments for cutting red tape are highlights of the Budget boost for small business.

The Government will extend the immediate deductibility rules for a further 12 months – to 30 June 2018 – allowing small businesses with an annual turnover of up to $10 million to immediately deduct eligible assets each costing less than $20,000.
“Small business has a big impact on the Australian economy – with 3.2 million small businesses employing 5.6 million Australians,” he said.

“It’s small business – not Government – which creates jobs and that’s why the Government backs small business.”
Mr Coulton also welcomed the announcement of a third round of the Stronger Communities Program which helps fund small capital projects in local communities, across Australia.
“This is a terrific programme, which helps us to invest in important community infrastructure right across the Electorate.
Mr Coulton said the Government will be reinstating the Pensioner Concession Card for 92,000 older Australians impacted by the January asset test change to allow continued access to discounts offered by the States and Territories.
“We will be supporting greater opportunities for older Australians who choose to downsize their housing with greater flexibility to contribute the proceeds of the sale of their home into superannuation without penalty,” he said.
The Government, in partnership with Medicines Australia will reduce the costs of medicines by $1.8 billion over the next five years. Another 60,000 patients at risk of chronic heart failure will benefit with the listing of new drugs at a cost of more than $510 million.
Commonwealth funding for hospitals will increase by $2.8 billion. This brings additional support for hospitals across Australia delivered under the Coalition Government to $7.7 billion.
Mr Coulton said he welcomed the strengthening of the welfare system to protect those who needed it most and the increased scrutiny on mutual obligation.
He said the Government would no longer accept excuses from repeat offenders who could not meet their mutual obligation requirements because they were drunk or drug-affected.
The Government announced it was planning a modest drug testing trial for 5,000 new welfare recipients and JobSeeker recipients. Those who test positive would be placed on a Cashless Debit Card for their welfare payments and be subjected to further tests and possible referral for treatment.
A $9 million investment will see rural and remote Australians who for the first time will be able to access psychology services covered by Medicare through teleconferencing.
The Government has also resumed the indexation of Financial Assistance Grants to councils, which results in an extra $836.5 million provided over the forward estimates.
The 18 local governments in the Parkes Electorate will share in $31,148,973 as part of the Roads to Recovery Programme to maintain and upgrade their local roads. Regional Freight Corridor funding for the Newell Highway will total almost $79 million, including $61,350,000 for the Mungle Back Creek to Boggabilla heavy duty pavement construction project.
Three bridges in the Walgett Shire and one each in Narrabri and Gunnedah Shires will share in more than $2.7 million for the completion of the Bridges Renewal Programme Round 2. Submissions for Round 3 of the Programme close on 15 May, with the successful applicants expected to be announced late this year.
Mr Coulton said the Coalition Government has underlined the importance of Landcare by investing more than $1 billion in the National Landcare Program (NLP).
He said the NLP was a key demonstration of the Coalition’s commitment to supporting strong natural resource management and the environment.
The program continues to focus on practical, on-the-ground ways to improve issues like soil health, erosion management and water quality, making the program relevant to all land managers—but especially farmers.
“Our farmers manage about 53 per cent of our landmass and with global demand for food and fibre set to double by 2050 it’s important that we keep Landcare front and centre to assist them to manage our natural resources,” Mr Coulton said.