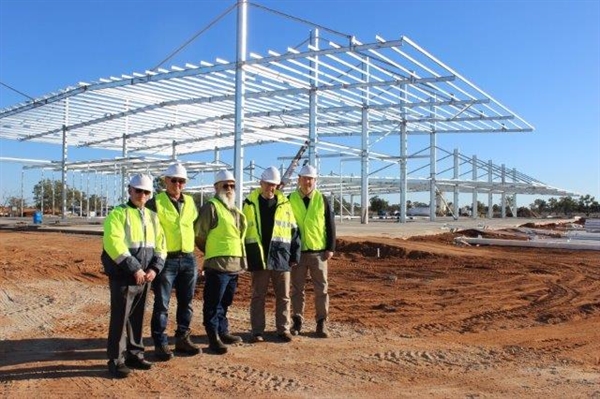 Construction of a $61m small stock abattoir in North West NSW is well underway thanks to a co-operative approach from the Federal Government, Bourke Council and a group of developers keen to boost the region’s economy.
The Federal Member for Parkes Mark Coulton this week visited the site of the Capra Developments project on the outskirts of Bourke and was impressed with the progress of the venture.
Mr Coulton met with proponents of the abattoir and inspected the first stage of the development, including the multi-level stockyard facility, on-site batching plant and evaporation ponds.
Capra Developments received $10m under Round two of the Federal Government’s National Stronger Regions Fund – a funding programme developed to support investment in a diverse range of infrastructure from tourism, water and transport infrastructure to cultural, sporting and healthcare facilities, providing sustainable economic growth in areas of disadvantage across the country.
The programme encouraged communities to identify their own priority infrastructure projects, and partnerships between not-for-profit organisations, local, state and territory governments as well as the private sector.
Mr Coulton said the project was a prime example of the benefits that can be achieved when the Coalition Government in conjunction with a local Council join forces with people with foresight and determination to bring a business venture to fruition.
Mr Coulton said the abattoir was on schedule to be operational by 2018 with an estimated 200 jobs to be created, providing a significant boost to the Bourke region.
“This project is on track to inject millions of dollars into the local community through various channels from the construction phase through to the farming of goats and the operation of the abattoir” Mr Coulton said.
“Capra Developments has set a target of processing 6000 goats a day in its third year of operation with probable markets in the United States, Canada, Taiwan, Vietnam and Korea” he added.
Mr Coulton said the town of Bourke was ideally located to support the abattoir with 50%-60% of Australia’s feral goats located in New South Wales, particularly in the North West regions of the State.