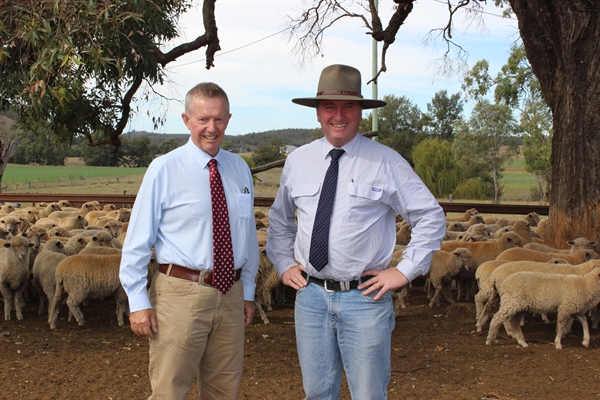 The Coalition is getting on with the job of delivering our water infrastructure needs, today announcing $850,000 to fast-track a feasibility study into a new pipeline for Cobar and Nyngan.

“The Coalition is expediting the planning work required to get water infrastructure projects shovel-ready because we are serious about ensuring water infrastructure gets built as quickly as possible, to help support strong regional economies and communities,” Minister Joyce said.

“This work is a key part of the process, detailing the feasibility, economic returns and sustainability of this project, as we identify the best sites to deliver new water infrastructure.”

Member for Parkes Mark Coulton said the project will look at the feasibility of a pipeline to replace the existing channel for supply of high-security, stock and domestic water to Cobar and Nyngan townships and Cobar mines that could save 4 gigalitres a year.

“The pipeline would reduce the evaporation and seepage losses inherent in the current channel system, allowing more water to be put to productive use to boost regional development and the local economy.”

“The town of Cobar, stock and domestic licensees and mining operations would all benefit from this project.”

Minister Joyce said the Coalition was delivering on its $2.5 billion commitment to building the water infrastructure of the future.

“It’s the right time for our significant investment in water infrastructure. A transitioning economy and growing global demand for agrifood products mean this is a time of unprecedented opportunity for our agriculture sector,” he said.

“As the economy transitions and diversifies, agricultural exports are playing a more important role than ever in our nation’s economy and prosperity. Rural exports have already overtaken coal to become our second-largest export after iron ore.

“The Coalition is taking action by carrying out the most significant investment in infrastructure in Australian history, including through the roll-out of our $15 billion water reform agenda, so we can make the most of these opportunities.

Freight route strengthened from Mungle Back Creek to Boggabilla
28 May, 2020