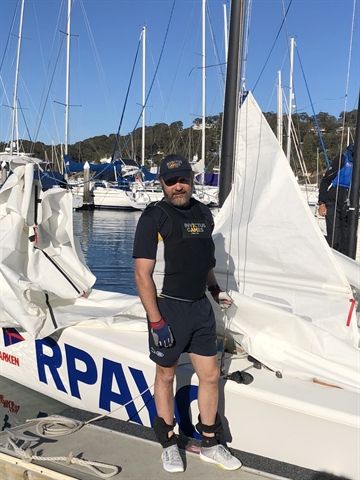 The upcoming 2018 Invictus Games will see a team of 72 members of the Australian Defence Force celebrate their fighting spirit – and one of those is Broken Hill man, Marcus Wilson.

Member for the Parkes electorate, Mark Coulton, congratulated Mr Wilson on his service and involvement in the Games.

“I would like to commend Mr Wilson on his valued service to the Australian Defence Force, and his involvement in the Invictus Games,” Mr Coulton said.

“The Invictus Games is for serving and former serving military personnel who have been wounded, injured, or become ill during their military service.

“Participating in the Invictus Games provides men and women with an opportunity to focus on their abilities, rather than their individual challenges.

“This is an inclusive sporting competition that recognises the contribution military personnel make to our nation, and demonstrates the incredible healing power of sport.”

Mr Wilson joined the Australian Army in 1988 and discharged in 2002, having served as both a Gunner and a Medic. He was deployed to Bougainville, Papua New Guinea in 1998 where he was awarded a Nursing Service Cross (NSC).

In 2000, Mr Wilson served as a part of the Joint Incident Response Unit (JIRU) working to secure the Sydney Olympics.

“Before putting my hand up for the Invictus Games, it was easier to stay at home and not exercise or socialise, which isn’t a healthy strategy for anyone,” Mr Wilson said.

“By nominating and now being selected for the Games, I have turned that around and I am now on a much more positive pathway, entirely due to sport.”

Mr Wilson said his greatest achievement to date is being awarded a Bravery Medal (BM).

“It was humbling to be awarded a Bravery Medal for rescuing five passengers from a crashed helicopter in Kabul, Afghanistan.”

Australia’s participation in the Invictus Games provides the community with an opportunity to be inspired by the courage, determination and achievements of our wounded, injured and ill, current and former serving military members.

The Games will take place from 20-27 October 2018 in Sydney. More information is available at www.invictusgames2018.org.