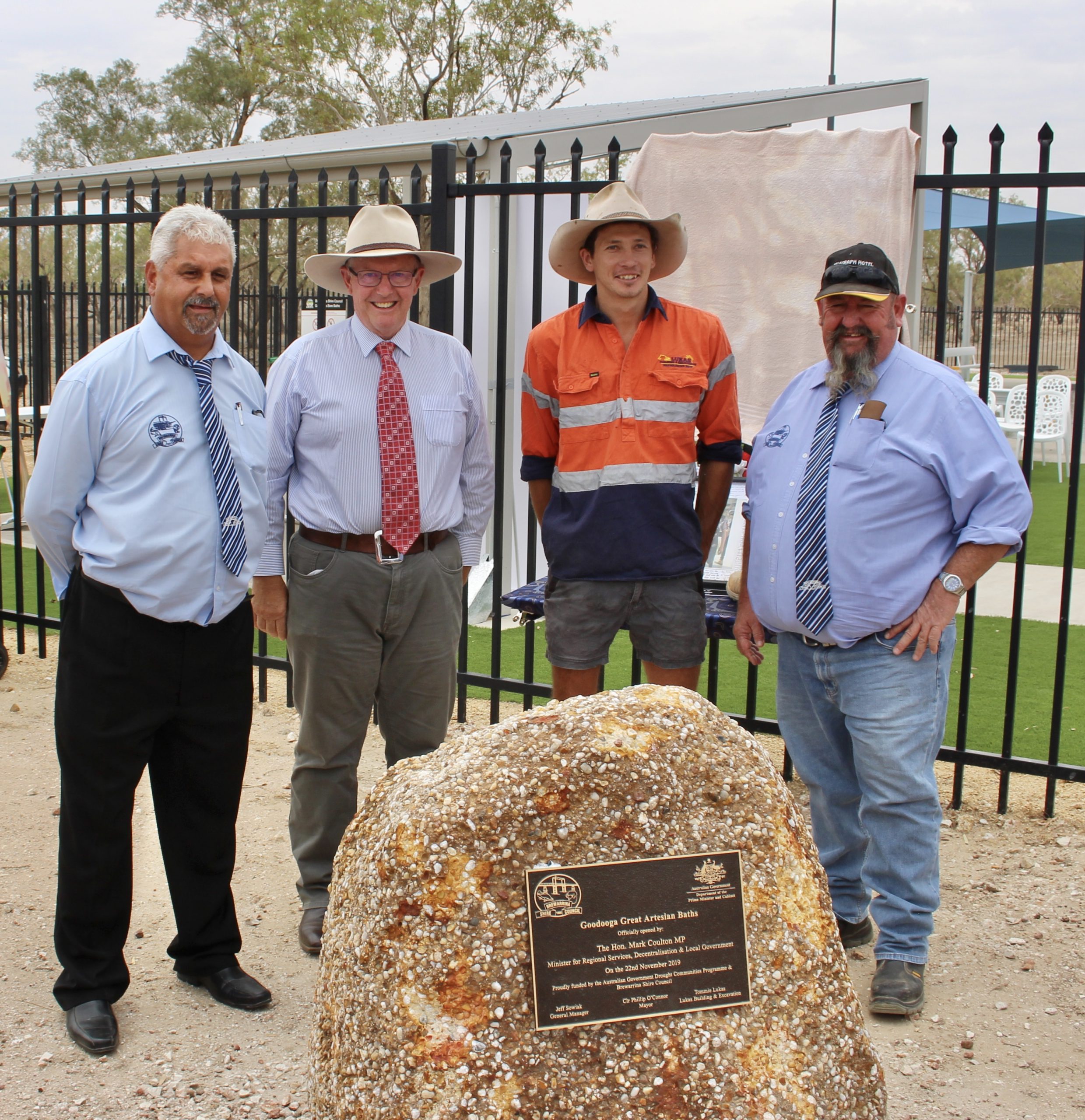 Local residents and visitors to the Brewarrina Shire will be able to enjoy a family-friendly hot spring mineral bath experience, with today’s official opening of the Goodooga Great Artesian Mineral Baths.

Member for Parkes and Minister for Regional Services, Decentralisation and Local Government Mark Coulton was on hand for the opening and said he is thrilled that the Federal Liberal and Nationals Government’s Drought Communities Programme (DCP) is providing important benefits to communities in his electorate.

“The new mineral baths funded under the DCP are an attraction that the Goodooga and wider Brewarrina community can be extremely proud of,” Mr Coulton said.

“The baths will provide a great tourist attraction and stimulate the local economy – it is estimated that a total of 18 jobs have been generated thanks to this project.”

Mr Coulton said $304,493 was allocated to the project under the DCP, with Brewarrina Shire Council providing a further $61,629.

“This project has stimulated community spending by using local resources, businesses and suppliers, and will provide long-term economic benefits to the Brewarrina community,” he said.

“Other local projects funded in the Brewarrina Shire under the DCP include the Road Safety Grid Program, Brewarrina Youth Centre, Walgett/Brewarrina Road Rest Stop, and upgrades to Brewarrina Community Hall, and Goodooga and Culgoa sports facilities.

“I’m pleased that as part of the additional drought support announced earlier this month, another $1 million each will be available to councils in my electorate.

“This extra money means councils including Brewarrina can keep investing in projects that will boost the local economy.”

Minister for Drought David Littleproud said the Coalition Government has invested more than $300 million in the DCP to fund targeted local projects and create jobs.

“Building the mineral baths created work and the tourists they attract will create even more,” Mr Littleproud said.

“A project like these mineral baths can be enough to make visitors stay another day and spend money in local towns and villages. This is a local solution from local people in the Brewarrina Shire to boost their economy.

“The drought doesn’t just hit farmers – the whole community struggles and projects like this recognise everyone needs support.”

Mayor of Brewarrina Shire Council Phillip O’Connor said the funding for the project has sustained short and long term benefits due to the economic stimulus it provided to the Brewarrina, Goodooga and Weilmoringle communities.

“The social outcome as result of the economic stimulus provided under the DCP has proven vital to our drought stricken communities,” Cr O’Connor said.

“Council and the community acknowledges and is thankful for the government’s ongoing commitment to our communities during these prolonged drought conditions.”

The Australian Government has provided $2.5 million in DCP funding to Brewarrina Shire Council for local projects, with a further $1 million under the Coalition’s recently announced drought package.