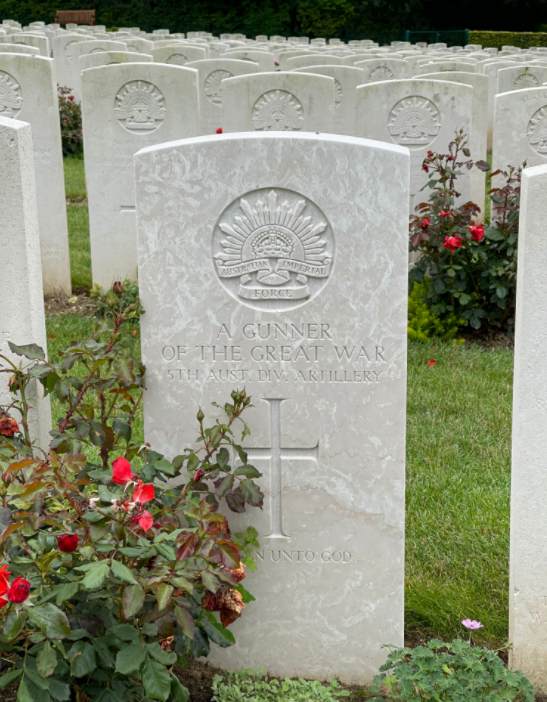 Photo caption: The unmarked grave at Adelaide Cemetery in Villers-Bretonneux, France which has been identified as the final resting place of Broken Hill soldier Albert Nicholson.

A previously unknown Australian First World War soldier from Broken Hill buried in an unnamed grave in France has been identified.

Minister for Veterans’ Affairs and Defence Personnel Andrew Gee said the soldier was identified as 10778 Albert Nicholson, a Driver in the 14th Field Artillery Brigade of the Australian Imperial Force.

“After years of investigative research, I can announce we now know the final resting place of Driver Albert Nicholson of the Australian Imperial Force, who died in France in the First World War,” Minister Gee said.

“Albert, originally from Broken Hill, New South Wales, enlisted in Adelaide on 17 September 1915 and left Australia for overseas service on 5 January 1916. He was Killed in Action at Villers-Bretonneux on 3 August 1918.”

It is believed Albert was preparing artillery positions for the Allied attack which was to occur on 8 August 1918, when he was killed by shellfire. Albert’s role would have included moving horse drawn artillery and ammunition.

He was buried in an orchard at Villers-Bretonneux, however the position of his grave was lost.

When Albert’s body was eventually found, his identity was not established and he was subsequently reburied in a Commonwealth War Grave, Adelaide Cemetery in Villers-Bretonneux marked as an Unknown Australian Soldier.

Recent investigations found evidence that an unknown soldier of the 5th Divisional Artillery, which Albert’s unit was part of, was recovered after the war from a location close to where he was believed to have been buried.

“Further research eliminated all other fallen soldiers of the 5th Divisional Artillery in the area, allowing for the identity of Albert to be conclusively established,” Minister Gee said.

”I want to sincerely thank the researchers from Fallen Diggers Incorporated, the Australian Army’s Unrecovered War Casualties team and the Commonwealth War Graves Commission on the identifications.

Federal Member for Parkes Mark Coulton said this news will bring closure to the family of Albert.

“I’m sure this will bring great comfort to Albert’s family who will at last be able to mark his final resting place, 103 years after his death,” Mr Coulton said.

“Broken Hill is a tight-knit community and the discovery of Albert’s grave will be welcome news throughout the region.

“The quest to identify Albert’s grave brings the number of Australian First World War soldiers which Fallen Diggers Incorporated has helped identify to 36, bringing closure to the families of our fallen and allowing us to know the resting places of those soldiers who made the ultimate sacrifice for our country.”

He was only 21 years old when he was killed.

“The identification of Albert is extraordinarily significant for his family but also for our nation. It demonstrates in the most profound way that Australia never forgets its sons and daughters no matter how long ago they lost their lives or what foreign field they rest in,” Minister Gee said.

The great nephew of Albert, John, had throughout the years searched military records and was surprised when he was told recently his great uncle was located in an unmarked grave.

“I’m extremely grateful my great uncle’s resting place has been identified and the fact we can do this 103 years after he passed and are still searching for other missing soldiers is incredible,” John said.

“Finding out this news has been an opportunity to reconnect with some family members I haven’t spoken to in many years.”

In consultation with Albert’s descendants, the Australian Army, Commonwealth War Graves Commission and the Office of Australian War Graves will make arrangements to replace the previously unnamed headstone with one bearing his name and service details.

Albert’s mother selected an epitaph for him, which will be engraved on his headstone.

It will read – “Great is our sorrow but God knows best, He has taken our loved one home to rest.”

John said he is extremely grateful his great-grandmother’s original request will be engraved on his great uncle’s headstone.

Further information on Unrecovered War Casualties is available on the Army’s website: https://www.army.gov.au/our-work/unrecovered-war-casualties