$956,500 to help 80 Indigenous people prepare for entry into the NSW Police Force 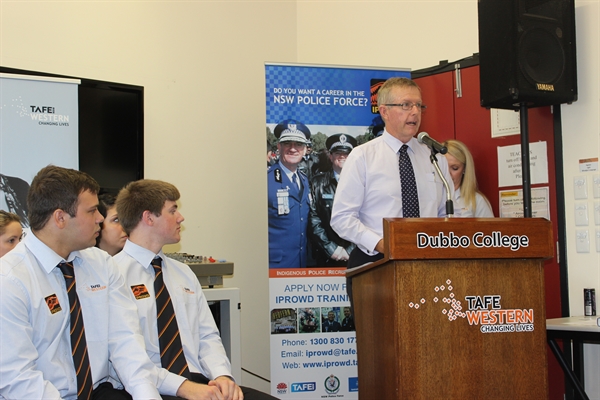 80 Indigenous Australians will be given the skills necessary to enter the NSW Police College in Goulburn through the further investment by the Australian Government in a NSW pre-employment programme.

The Minister for Indigenous Affairs, Nigel Scullion, and the Member for Parkes, Mark Coulton, today announced additional funding of $956,500 for the Indigenous Police Recruitment Our Way Delivery (IPROWD) programme.

Minister Scullion said the funding would deliver tailored support to 80 participants to help kick-start their careers.

“Getting Indigenous people into meaningful jobs, including working as police officers, is one of the Australian Government’s highest priorities in Indigenous Affairs,” Minister Scullion said.

“We know IPROWD provides a successful pathway for Indigenous people to enter the NSW Police Force.

“There are many examples of IPROWD being the catalyst for Indigenous people entering the workforce for the first time, or returning to work after a long period of being unemployed.

“The Australian Government has invested $2.4 million in the IPROWD programme in 2013 – 14 to support 240 Indigenous Australians undertaking the programme.

“I congratulate the twelve graduates who are receiving their qualifications today and those who have been instrumental in ensuring that the IPROWD program is a success,” Mr Coulton said.

“The graduates have all completed a Certificate III in Vocational and Study Pathways course and developed a range of skills recommended by the NSW Police Force and Charles Sturt University.

“NSW police officers work as part of the teaching team for each IPROWD group. This involvement provides participants with specialised training and mentoring throughout the course.

“The programme runs for 18 weeks and is a partnership between the Australian Government, the NSW Police Force, NSW TAFE and Charles Sturt University and it’s this level of partnership that makes this programme so successful.

“The tailored support provided to course participants includes financial assistance for travel, accommodation, childcare and medical expenses, as well as assistance in looking for, and applying for work.”