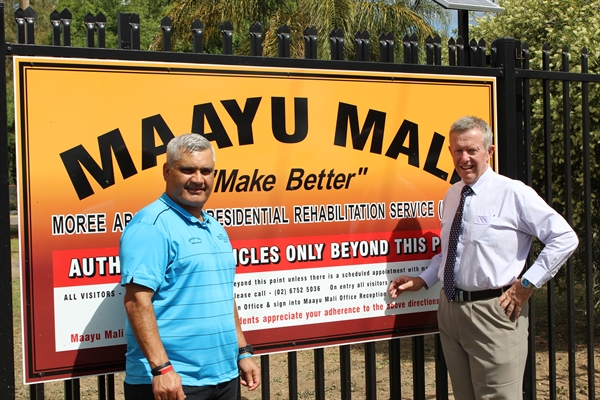 The Minister for Indigenous Affairs, Nigel Scullion, and the Federal Member for Parkes, Mark Coulton, said the funding announced today built on the $3 million the Government had already invested in the establishment and operation of the Maayu Mali centre.

“Mark has been a strong advocate for the vital services the Maayu Mali centre delivers for Indigenous Australians living in and around Moree. The centre is currently able to provide intensive residential rehabilitation for up to 18 clients at any one time,” Minister Scullion said.

“Importantly, the organisation is committed to Indigenous employment and most of the staff employed at the centre are Indigenous Australians.”

Mr Coulton officially opened the Maayu Mali centre in September last year and was very impressed with both the passion of the staff employed at the centre as well as the resolve of residents there at that time.

“Addiction to drugs and alcohol causes great distress and difficulties for individuals, families and communities and I was so impressed by the determination of some of the residents at this centre to turn their lives around,” Mr Coulton said.

“I also admire the resolve of Chris Binge and his staff and their commitment to giving hope to people battling addiction.

“With addiction being such a story of relapse and with the hope of eventual rehabilitation, the assurance of future funding arrangements will give both the Maayu Mali centre and its surrounding communities the security every rehabilitation programme requires.”